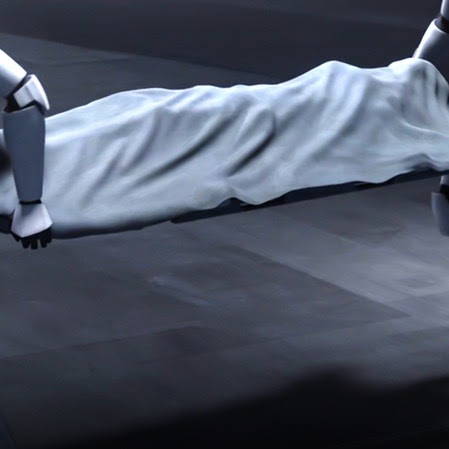 According to issue #9 of the canonical Marvel Comic Star Wars, Master Shaak Ti was on Coruscant as the Jedi were being purged, and it was there that she would record a holocron in an attempt to preserve the knowledge of the Jedi Order. However, there is no definitive death for her character in the current canon, so there is still the slightest possibility that this is indeed Shaak Ti. She could have escaped Coruscant after recording said holocron, and fled to Kamino for an unknown reason where she hypothetically would have been found and murdered. If this is true, would make this the fifth time that the character has died.

There are two different deleted scenes from Revenge of the Sith where Shaak Ti died. She was first slated to have been killed during the battle of Coruscant at the beginning of the film, where she would have been captured and stabbed by General Grievous aboard his flagship, The Invisible Hand. Her second possible death in Revenge of the Sith was here being killed by the newly proclaimed Darth Vader in the Jedi Temple during Order 66.

However, Shaak Ti’s death in Legends was cemented when she was killed by Starkiller in Star Wars: The Force Unleashed (one of the greatest Star Wars games of all time). In this storyline, Shaak Ti survived the initial purge of Order 66 and had escaped to Felucia. Vader sent his apprentice, Galen Marek, codenamed Starkiller, to search and destroy any Jedi that had escaped the initial purge. Shaak Ti attempted to use the flora of Felucia to defend herself when Starkiller found her, but she was no match for Vader’s apprentice and perished at his hand. Before the Disney retcon/elimination of the original Star Wars Expanded Universe, now known as Legends, this was the canonical death of Shaak Ti.

It is, however, a good thing that the Jedi that was killed on Kamino in the first episode of The Bad Batch was not confirmed to be Shaak Ti. Although Shaak Ti did not play a prominent role in the films, she became a well-known character in The Clone Wars due to her activities involving the cloning facilities on Kamino. The lack of a definitive death in the current canon means that she can return in future Star Wars media, such as the already confirmed Season 2 of The Bad Batch or even other Star Wars projects such as Star Wars: Ahsoka or The Mandalorian. Her character could potentially gain a critical role in the post-Order 66 phasing out of the Clone Army, considering that she personally oversaw the training of the clones on Kamino, including the famous Domino Squad.

But regardless of how Shaak Ti is confirmed to die in the current canon, the only definitive death for me will always be when her plastic head was chopped off in Lego Star Wars: The Skywalker Saga